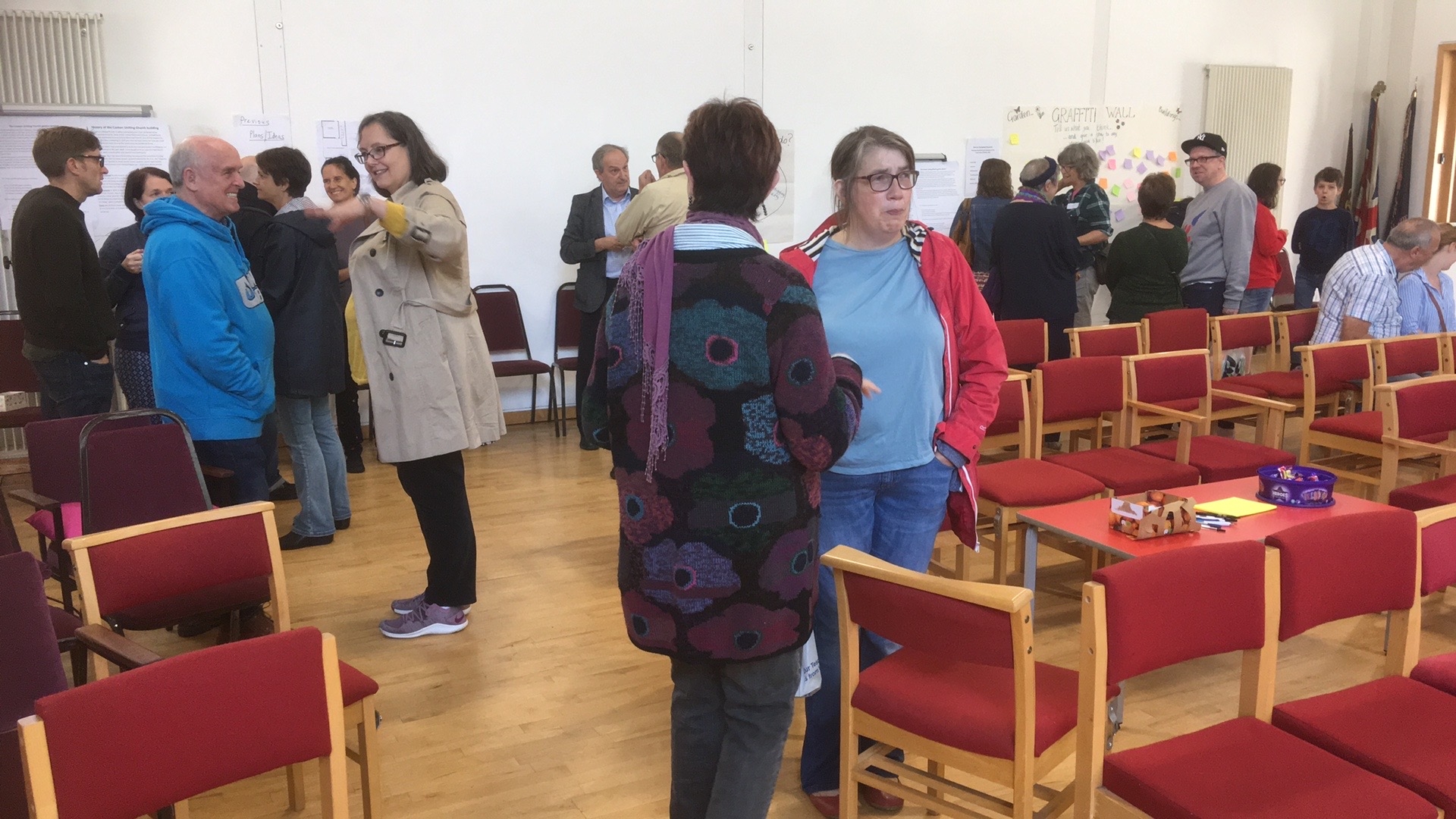 We were encouraged to welcome many neighbours to the church to view and react to the plans we have for redevelopment.

Here are the written remarks that people left with us to consider:

Rentable meeting rooms…
need at least two in the new-build for 20 people.
If possible access without needing to go through the larger hall
Rentable hall.
Equip with blinds to facilitate powerpoint presentations

Affordable place to rent for music lessons.
Rentable storage facility
Postboxes rentable for local charities and small businesses (
I’d rather pay you than £180 a month elsewhere)

Keep the AA!! but a bigger space please More in the round. accessible.
(We talked before about this: a recording studio)

Are you doing an Equality Impact assessment?
Contact all User-groups also on accessibility

Contact all neighbours, and communicate with them regularly.
Inform [them] of timeline for the process

Have one number to phone in case of trouble with the builders Discourage car-use. The parking is already diabolical And people can park behind the shops

Let everyone know what came out of this consultation!

DESIGN for the building:

These halls are beautiful but not fit for purpose, really!
But can as much as possible be re-used/re-purposed to keep some of the history of the old building
Or someone else could use the separating folding doors

Make it BOLD and interesting

I think it is GREAT that you are consulting the community. Good Stuff.

Fruit trees and veg !!! Veg production is the most valuable
Green beans, potatoes and broad beans
A greater variety of potatoes
Raised bed for children’s gardening club (Astrid will help)
Washing facilities!
A Gazebo covering furniture, table and chairs… Bolted to the ground!!

Think maintenance! A volunteer comittee including people from the community, Community service/ schools/ or a paid helper

design: small lawn, path around, easy maintenance border
Continue with the same format as this one: Raised beds, flowers and food

For kids to know the value of the earth, where food comes from
An educational place, encouraging kids.

A place for bookreading or just looking at flowers,
birds , beautiful things
Meeting others
Forgetting your worries and having a laugh
A place bigger than your own house and garden, just sit peacefully,
A contemplation place
A memorial place

Keep the AA!
A yurt in the garden, ..multipurpose?
A book-exchange from a recycled telephone box like in Michaelston-le-Pit
A bandstand in the garden for live performances
Table tennis and or squash courts
Make a “library of things” where people can borrow a tool or something
An “unwanted food” exchange
Do workshops in gardening, growing vegetables.

A “changing places” facility in the centre block, with hoists and bed.

Thank you for the warm welcome.
Provide Welsh learning

I live around the corner and I enjoy walking past this beautiful building. I was upset when the old building was knocked down, and although the new building feels modern and well designed I would‘ve preferred for the old building to be redesigned from the inside.

This is what I would like to see for the buildings in the back. I can see that they need upgrading but the history and the beauty within the walls could be preserved. Lots of old buildings have been succesfully been repurposed for modern day usage: Canton library, Chapter Arts and the old library in town have all successfully reinvented themselves from the inside. I appreciate that this style of renovation is expensive, but too much these days is thrown away.

I am aware that expense is an issue. Lots of the other buildings have had to increase their income by renting out spaces. There are for example many creative industries springing up around Canton which require an office space. Maybe a solution would be to rent out space to one or two of these businesses.

I know that modern building is more eco-friendly than older ones, but maybe it would be more energy efficient to modernise the interior of the old building, than to knock it down and start all over again. I am sure whatever happens, this building shall remain at the heart of the community as it has been for many years.

At the consultation there were a number of documents on display which outline the current plans for redevelopment of the Canton Uniting site.

Here are some of them:

The garden was established in 2017 following a donation from a church member. Previously, there was a piece of waste land on the side of the church but we put in seven long raised boxes and planted a variety of plants and bulbs donated by church members, friends and neighbours. It was agreed that it would be an organic garden without the use of chemicals.
We were fortunate to have the advice of a semi-retired professional gardener. We applied for a Community Grant from the Co-op store next door, which was awarded at the end of 2017. With that grant, we were able to top up the soil in the boxes, buy watering equipment, and buy some seedlings to speed up the growing process. In addition, the Co-op gave us financial support through their Community Scheme which enables members to donate 1% of member purchase to a local good cause.

The garden has grown and flourished and we have been able to produce: chard; green beans; onions; beetroot; carrots; potatoes; sweet peas; aubergines; lavender and cabbage. These have been enjoyed by local passers by, church people, asylum seekers in a drop in project and others. The children have particularly enjoyed helping to plant the potatoes and then enjoyed the magic of digging them up a few months later ready to eat!

The main benefits of the garden have been:
• The use of the organic produce
• An area for sitting and relaxing
• The involvement of children and young people from the neighbourhood and the church • A colourful display of plants and flowers for passers-by to enjoy
We would love to know what you think about the garden. So here are some questions for you....
1. What do you like about the current garden?
2. How do you think it could be improved?
3. What ideas do you have for a larger garden?
4. Are you interested in getting involved to maintain a new garden? If so, are you willing for us
to include you on our distribution list?


Canton Uniting buildings and their development

History
Canton Uniting Church is called 'uniting' because it has combined three previously existing churches: New Trinity United Reformed Church, Llandaff Road Baptist Church and Grand Avenue United Reformed Church. A chief motivation for the first two churches combining in 1995 was a vision for improving ways to serve the community by combining forces.
The front of the church was demolished to build the new and modern building and it was opened in the year 2000. It was designed as an open-fronted church – open to God, open to each other and open to the community.

Use of buildings
Over the years the building has provided a play group, a luncheon club for older people, accommodation for the A.A., the Treganna Family Centre for families in need, NHS health visitor sessions, youth organisation meetings, concerts, choirs and a drumming group – apart from all the church activities.

Previous proposal
As the income of the church has reduced, it has become more difficult to maintain the older, 19th-century part of the building. So the church approached a housing association to see whether it was interested in buying the land at the back of the building to create sheltered housing. The association responded positively but finally the plans were turned down.

New proposal
In 2017 a new small garden project was set up on waste ground at the side of the church. This has grown and flourished. The church has now decided to propose a new scheme. This involves the land being retained by the church but the old building knocked down and the existing garden moved and expanded to occupy the larger space created for it.
Costs
There is some capital to fund this development but grants will need to be applied for to enable these changes.
28.09.19.